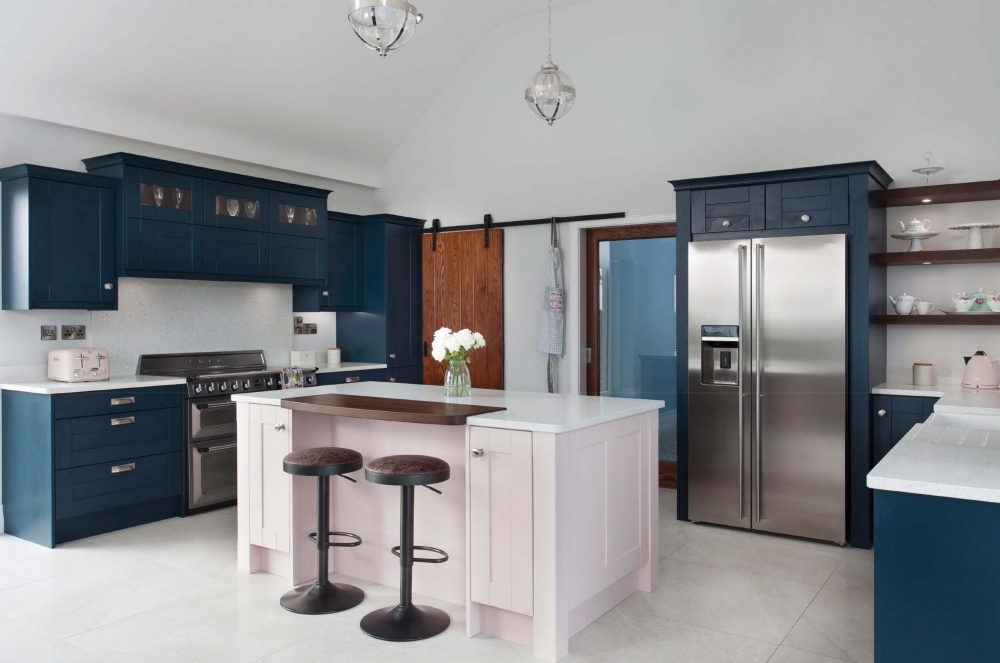 Between their house project and planning their wedding, Bronagh and Brendan have had a busy eighteen months. ‘We were building the same year we got married so time to view showrooms and make appointments would’ve been a luxury; we depended heavily on social media, in particular Pinterest. Our kitchen is Pinterest-inspired along with practical elements I knew I wanted, such as a walk-in pantry and a roll-out butcher’s block table for baking that is a lower level to the kitchen counters,’ says Bronagh.

When it came to deciding on a company to design and make their kitchen, the couple went to Dorans Kitchen & Home based on their excellent reputation. ‘My husband is a painter and decorator and has done a lot of work in new builds and renovations, where he has seen the great design and quality of Dorans Kitchens. I also knew from looking at their work that they would be able to help with the vision I had.’ Dealing with Eamon Doran, the couple outlined their brief and specific vision they had for the space.

‘I had a very clear idea of the style I wanted, nothing too modern but with the openness of the room I knew that anything too traditonal wouldn’t work either. The sliding barn door was something I’d always wanted from the architect stage, so it was nearly a case of making the kitchen to suit this! I also always wanted a range cooker and American style fridge freezer so it was literally incorporating these with all my Pinterest ideas, such as the crate boxes and butcher’s block table and leaving the logistics to Eamon to ensure everything worked in the space.’

Taking Eamon’s advice, Bronagh decided to incorporate the breakfast bar into the island. ‘I originally thought of having a separate stone breakfast bar but Eamon felt it wouldn’t work with the proportions of the room. Eamon was exceptionally professional and patient, especially as I changed my mind several times over the colour choice! Other design details Eamon suggested was the floating shelves, which look great and show off my obsession with cake stands and plates!’

Combining painted finishes with wood accents, this scheme sits very naturally in its open plan surroundings. ‘We’re delighted with how everything has turned out. I had a great relationship with Dorans. I felt like I could ask them anything or make suggestions without being shot down and they were very open minded particularly as I did come with my own ideas. They were also very flexible with times for meeting. I currently work and commute to Dublin and as previously said, time was precious with wedding planning etc so it was great that Eamon and his team could accommodate at weekends and some evenings, which really made a difference and took a good portion of stress off us.’

What was the brief? Bronagh has a very definite taste and had a strong vision of how she wanted the kitchen to look. She does a lot of baking and in particular, the layout had to be tailored to suit the practicalities of this. She was very clear with her brief; we simply added some additional features to enhance the design and brought it all together as a working functional space.

What are the key design features? The barn door connecting the kitchen with the walk-in pantry is a statement feature and something Bronagh was set on from the outset. This formed the starting point to the design in that it introduced the wood element, which we have continued into some of the cabinetry detail. The pull-out butcher’s block baking table is another feature, designed for Bronagh’s love of baking. It’s slightly lower than the countertop, allowing it to slide in and out when needed. As well as being a practical feature, it adds a design element to the kitchen and enhances the contrast of painted and oak finishes.

What other design details did you suggest to enhance the scheme? The barn door was stained to match the warm oak features and internal doors throughout the house. Bronagh liked the idea of apple crate style drawers on the island so we custom designed these as an alternative to conventional drawers, which the freestanding style of the butcher’s block. I advised on incorporating the breakfast bar into the island rather than crowding the space with a separate bar area, and also suggested the display shelving to enhance the casual look.