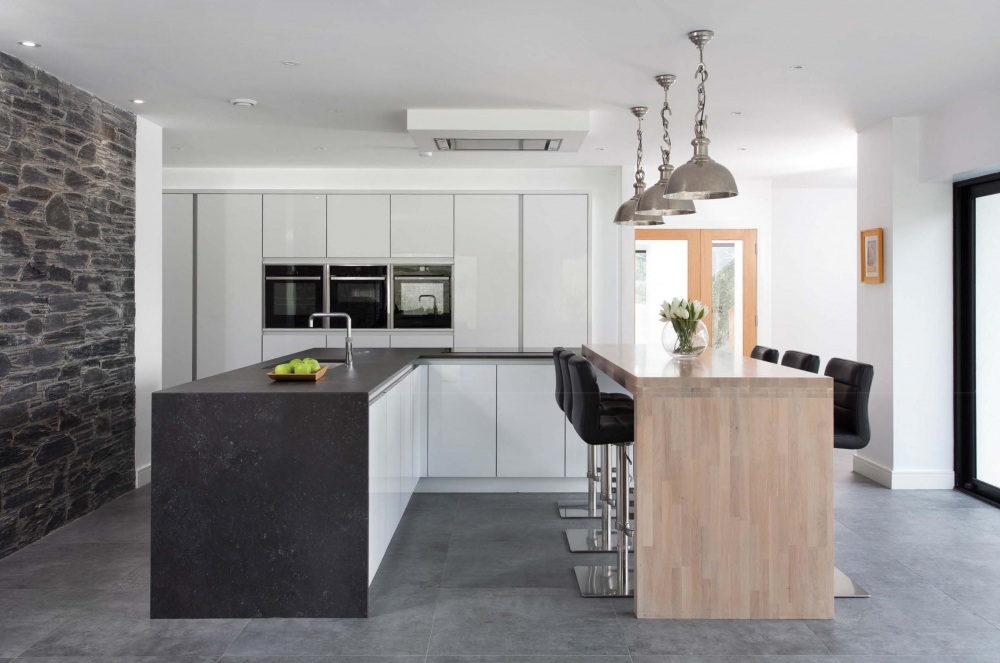 This stunning new build contemporary home reflects the personal style of its owners, and naturally they wanted to create a modern style kitchen that complement the architecture of the property. Specifying a spacious open plan layout with the kitchen, dining and living areas in one, the couple put great importance on the kitchen as the central feature of their home and visited a number of showrooms to gain an understanding of what was available to them. ‘We went to a selection of showrooms but we wanted to use a local supplier if possible. Once we visited the Doran’s Kitchen & Home showroom, we knew we had found our perfect match. We ended up going with Doran’s based on their reputation, and after meeting with Eamon we believed his design would suit our home best.’

Wanting a central island with breakfast area, the couple took Eamon’s advice on materials and finishes. Eamon suggested moving the sink to the island, as well as the hob, creating a U shape design that would maximise the work surface. He also included a flexible two-sided breakfast bar into the design, giving a great casual dining space. ‘We love the U-shaped island Eamon has designed. It’s perfect for socialising and preparing meals. We love sitting at it and taking in the gorgeous views of Slieve Gullion.’

The owners also took Eamon’s advice on the colour scheme and other details such as the suspended bank of kitchen units. ‘The floating units are fabulous; it really adds to the design and I love how it leaves more floorspace on show. It gives the room a feeling of space. Originally, we had wanted to have a window in the stone wall and to place the sink there too. But Eamon advised against this. This was another great move on his part, allowing the stone wall to become a stand-alone element of the kitchen.’ Adhering to the fuss-free look with minimal detailing, Eamon felt the kitchen could take a little contrast, when it came to the choice of breakfast bar surface choice and suggested a weathered oak, which really sets the kitchen off and is the perfect contrast to the Dekton Fossil surfaces used on the island.

This is a highly functional design. The kitchen has been created as a super stylish and sociable space. An amazing environment for preparing and eating meals and being together as a family - the owners couldn’t be happier. ‘We love our open plan space with the kitchen as the hub of the home. Eamon was great to work with and the whole experience was straight forward and professional.’

What was the brief? My clients wanted a functional contemporary kitchen with clean lines and the wow factor to work in the open plan space they were creating for their new home. They wanted the kitchen to be the centre hub of the space. They were open to ideas on layout and finish, so I showed them other projects from our portfolio, and they took inspiration from the various design elements they liked. This was a great starting point to the design which evolved further after a site visit.

What features did you add to enhance the scheme as a whole? The initial idea on the plan was to have a window in the stone wall and to position the sink there. I advised against putting any units or even a window here leaving the stone wall as feature to the room, and locating the main bank of kitchen units along the back wall of the room. With this agreed, I moved the sink to the island along with the hob, creating a U-shaped island to maximise the work surface and create two separate zones for washing, prepping and cooking.

What are the most notable features in the kitchen? As the only wall units in the design I wanted to make the tall run of cabinetry a stand-out feature rather than just a necessity to house storage and the ovens. They are semi integrated into the wall, giving the appearance of shallower depth while floating off the ground, a bespoke recessed lighting package was added to further add to the visual impact. The U-shaped breakfast bar has been the key success. This gives a social space cooking and prepping in the kitchen but also is flexible so you can sit and enjoy the views of Slieve Gullion through the panoramic wall of glass. To further enhance the seated I suggested adding in a timber breakfast bar which contrasts nicely with the Dekton work surfaces.

If you've been impressed by this case study, and would be interested in discussing ideas with our designers at Dorans Kitchen & Home, now one of the leading kitchen suppliers in the UK and Ireland, you can contact us on (028) 30848917.