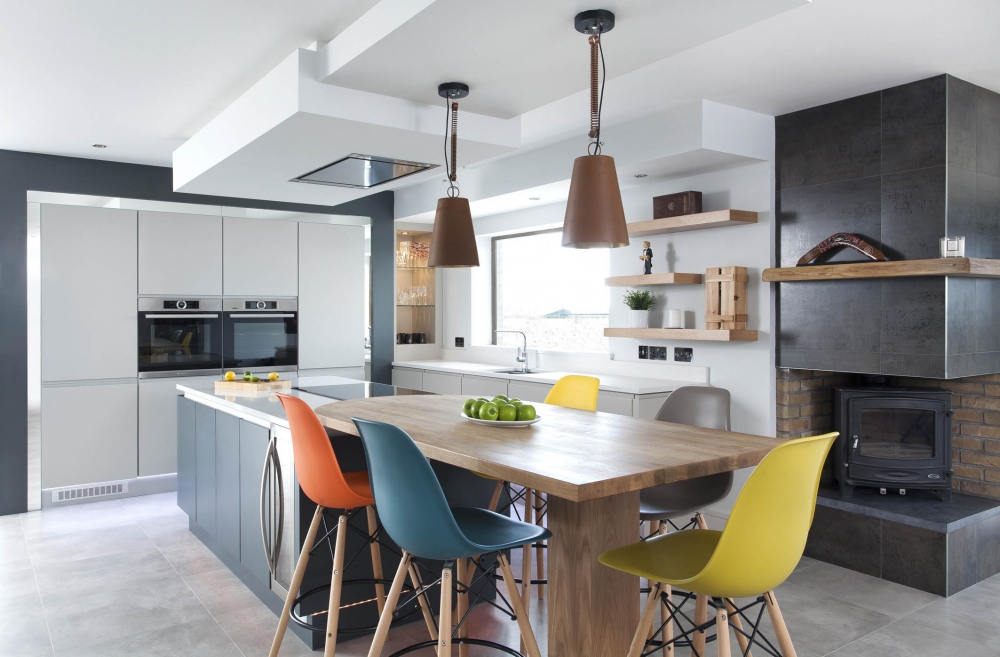 This newly built property presented itself as a totally blank canvas, giving Ailish and Gary the opportunity to put their stamp on the interior to create a contemporary yet cosy family home.  ‘The house was built to weather-tight stage when we bought it so we pretty much purchased a shell.  The internal layout was there, so it was a matter of working with the layout and fitting it out, starting with the kitchen!  This was our first time choosing a kitchen so there was so much to consider.  We had a fantastic kitchen designer through, Jordan Price at Dorans Kitchens, he made the entire project very enjoyable,’ says Eilish.

It was after seeing case studies on our website that the couple decided to visit the showroom.  ‘Gary sent me a link showing some of your gorgeous kitchen designs with dropped ceiling details above the islands.  This really drew us to Dorans; I knew all along that I wanted an island as the main workspace with a hob centrally positioned and I didn’t want a tunnel extractor coming down from the ceiling, so this dropping ceiling with built-in extraction really appealed.’

Dealing with Jordan, the couple took inspiration from the showroom displays as well, of course, from Jordan’s design creativity.  ‘At that first meeting, Jordan went through a detailed checklist of everything we wanted to incorporate.  We’d been to a couple of other  showrooms and felt the designers just did their own thing.  Jordan really listened and took everything on board, everything we wanted to achieve.  We came away from that first meeting feeling confident that he really knew what we wanted.  Sure enough, as soon as we saw the first set of plans, we thought – that’s it!’

Putting total trust in their designer, Ailish and Gary were happy to give Jordan freedom with the design.  ‘As well as the dropped ceiling detail mirroring the island, he also designed the lowered ceiling by the window and the mirrored glass framing the tall cabinetry.  I was unsure of this before I saw it – we have three young children – but it works so well! Jordan also suggested the glass shelving in the corner, in what had been a dark area.’  The eating area extending from the island was Gary’s absolute must-have feature. ‘Rather than a breakfast bar, Gary wanted a spacious table where all five of us could eat comfortably together.  I must say, Jordan really nailed it with the design – he’s done an incredible job!’

If you’ve been impressed by this case study, and would be interested in discussing ideas with our designers at Dorans Kitchen & Home, you can contact us on ‪(028) 30 848917.